Boost your sales in foreign markets with this new feature from IdoSell. IdoPay payments with 19 new currencies.

Customers who shop online expect that they will be able to pay for their purchases in their local currencies. That is why merchants who want to start selling in more markets should provide them with such an option. At IdoSell, we want to make it easier for merchants to start selling cross-border. Thus, we are introducing a new feature - processing of 19 new currencies in IdoPay. 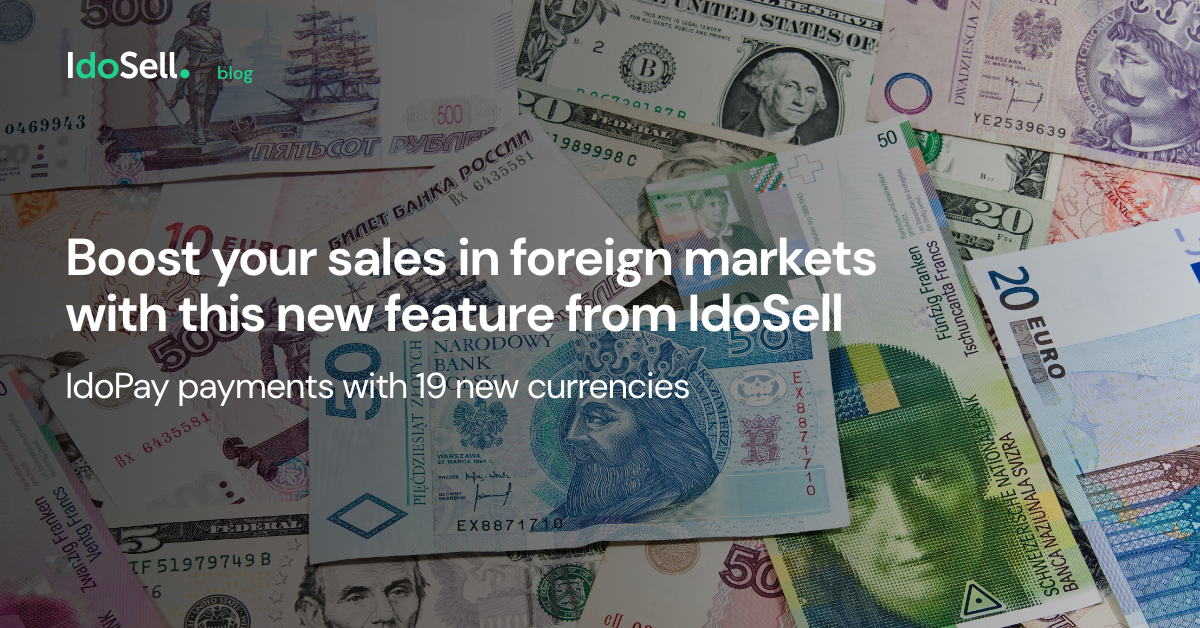 The ability to pay for an order in a local currency is one of the most important factors that affect sales conversion in cross-border commerce. GS1 Polska's research confirms this in the report "Cross-border e-commerce. GS1 standards in cross-border logistics". The creators of the report indicate that multi-currency payment systems, such as IdoPay, which serve customers in multiple languages and accept different currencies, significantly increase the level of trust of the foreign customer and eliminate problems related to currency conversions and charging additional currency conversion fees. The data shows that consumers identify the risk of unfavorable billing associated with currency diversity among the biggest disadvantages of cross-border.

Until now, IdoSell merchants who sold abroad and used the IdoPay payment system could accept card payments in PLN, EUR, CZK, USD and GBP. Now we have prepared a solution that completes this catalog with as many as 19 new currencies, which will fully support IdoPay 1-Click Express checkout. All transactions within this IdoPay will be automatically converted to EUR. As a result, merchants will not need to have special currency accounts in their or local banks.

A list of all available currencies for card payments at IdoPay (we have italicized those supported so far):

How does it work?

Stores that want to use the new 19 currencies must provide consumers from a given country with accurate information: about the offer, the terms and conditions for completing purchases, complaints and returns at least in English (as required by the Visa payment system), and set the selected local currency as the billing currency in the store's administration panel (this is related to the mechanism of IdoSell). After enabling the service for a given country, shoppers will see that they can pay for purchases in the local currency (in which the consumer's account will be debited).

The amount for purchases made by a consumer from a given country, will be converted by the bank that cooperates with the payment operator into EUR (in this case, it is to Danske Bank). The card transaction will be settled in local consumer currency, and the amount from the transaction will go to the EUR balance in IdoPay. Refunds from such transactions will be set up in the local consumer currency in which the order was paid, and will be processed from the EUR balance in IdoPay.

All information about payments performed will be visible in the store's administration panel, in the local currency. In the CSC, retailers will find details of the transaction according to the exchange rate on the day of purchase and a summary per currency, with the possibility to download a report for the selected period.

The service is being gradually activated in store panels and will be available to all merchants within two weeks. Customers can already set support for card payments via IdoPay for new currencies in their payment profiles, it will activate automatically when payments with new currencies become available to them.

IdoPay is a payment system that enables sellers to pay for orders with more than 20 currencies from around the world. Combined with the innovative and comprehensive Cross-border with IdoSell service, it allows you to start selling internationally quickly and efficiently.

As part of the Cross-border with IdoSell offer, you can automatically translate your store, connect the most popular delivery methods in your country and card payments in the local currency. This makes it easier to gain the trust of foreign customers at all stages of order placement.